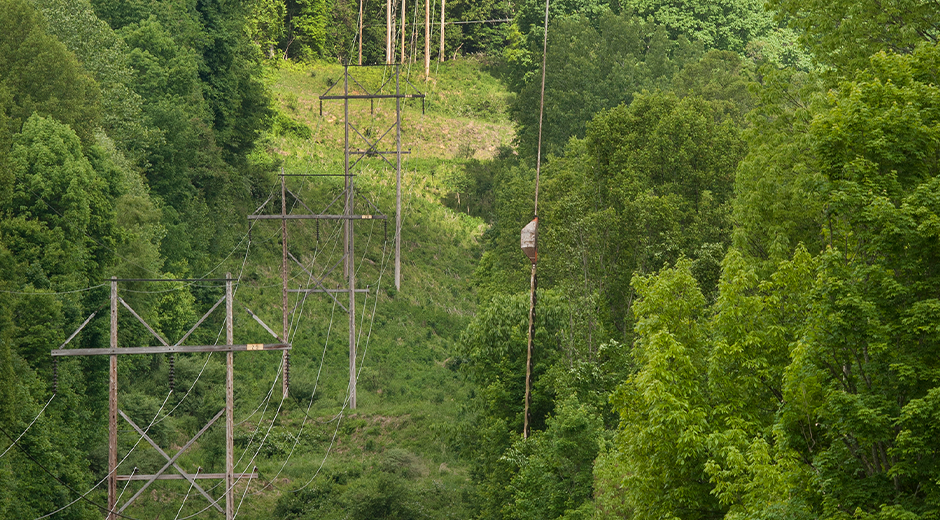 WILLIAMSPORT, Md., June 1, 2021 -- Potomac Edison, a subsidiary of FirstEnergy Corp. (NYSE: FE), is using a helicopter equipped with an aerial saw to trim trees and maintain electrical clearances along six difficult-to-access transmission line corridors in Maryland, West Virginia and Virginia. The work began on May 20 and is expected to conclude in mid-July.

Maintaining proper clearances around transmission lines and electrical equipment can help reduce the frequency and duration of tree-related power outages, especially those associated with severe weather such as spring and summer thunderstorms.

"Taking this step to safeguard our high-voltage power lines is an important part of our vegetation management program and an effective way to reduce service interruptions for our customers," said James A. Sears, Jr., president of FirstEnergy's Maryland operations.

The helicopter trimming trees along the transmission lines is a white Hughes MD500 with blue and yellow stripes prominently marked with a registration number of N11AS in blue paint. The helicopter and saw are owned and operated by Aerial Solutions and will work only as weather conditions permit.

The aerial saw will trim trees along the sides of 106 miles of six high-voltage transmission lines in the following locations:

Suspended on a boom beneath the helicopter and equipped with multiple 24-inch rotary blades, the aerial saw is typically deployed along transmission lines in areas that are environmentally sensitive or inaccessible to bucket trucks and other vehicles. This fast, safe and efficient method of trimming typically covers more area in a day than a ground crew might complete in a week. The saw also eliminates the risk of injury to workers using bucket trucks or climbing trees to cut limbs near high voltage equipment.

The saw cleanly cuts tree limbs 8 to 10 inches in diameter, which fall straight to the ground propelled by air blasts from the helicopter rotors. Ground crews move limbs that have fallen onto roadways, yards, agricultural fields or in streams into adjacent wooded areas. The ground crew will also flag and stop motorists along roads if the helicopter saw is working nearby.


The helicopter flies above and alongside transmission lines and may circle around to perform additional trimming. The pilot communicates with local airport personnel whenever the helicopter is operating within their air space.

Potomac Edison will clear vegetation along approximately 1,670 miles of distribution and transmission power lines in its Maryland service area this year and 1,550 miles of lines in its territory in the Eastern Panhandle of West Virginia as part of its $38 million vegetation management program.

Trimming trees around power lines is critical to providing reliable electric service for Potomac Edison customers. In 2020, the company saw a 45% reduction in tree-related outages compared to 2019, and the amount of time customers experienced service interruptions due to trees dropped by 75%.

Editor's Note:  Action photos of the aerial saw are available for download on Flickr. A video explaining FirstEnergy's vegetation management techniques can also be found on YouTube.