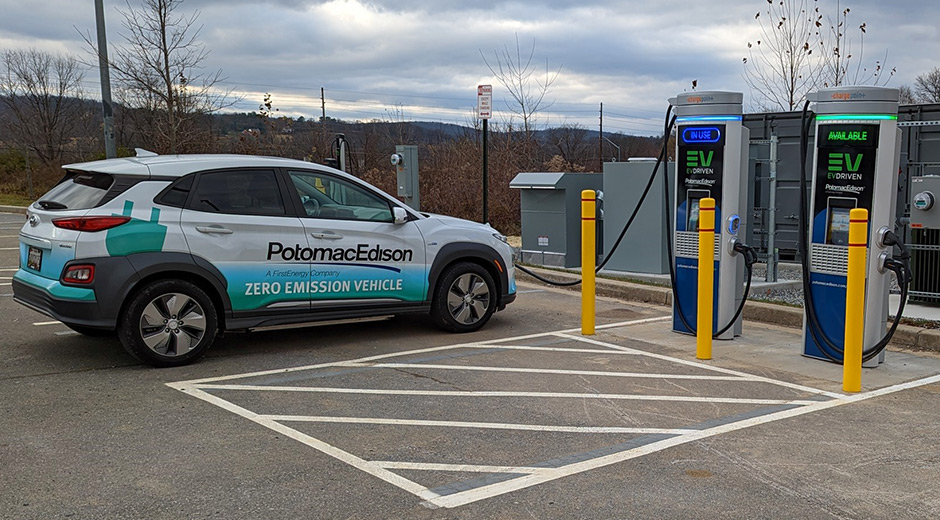 WILLIAMSPORT, Md., Dec. 13, 2022 -- Potomac Edison, a subsidiary of FirstEnergy Corp. (NYSE: FE), has completed a battery energy storage project paired with two new electric vehicle (EV) fast-charging stations and one Level 2 charging station in Frederick County, Maryland. Because fast-charging stations create significant demand on electric grids, the bundling of the storage system with fast chargers will allow Potomac Edison to study how energy storage can help minimize the impact of such demand spikes on its network.

Owned and operated by Potomac Edison, the $1.4 million system is located at the Myersville Park and Ride near the Interstate 70 and Route 17 interchange. The two fast-charging stations, also known as direct-current fast chargers (DCFC), can provide an 80% charge for most electric vehicles in less than an hour, enabling drivers to recharge during the day or on a break. The Level 2 charging station at the site can accommodate two vehicles for simultaneous charging and delivers eight to 24 miles of range per hour of charging.

In addition, the system includes a 500-kilowatt battery that provides uninterruptable electric vehicle charging and reduces the load drawn from the grid by powering the charging stations during peak demand times. In the event of an outage, the charging stations also will be energized by the battery-supplied energy. The battery system is expected to be able to provide approximately eight hours of uninterrupted EV charging.

"This exciting new energy storage project will provide us with valuable insights as we prepare to maintain and enhance system reliability in the future as electric vehicle adoption increases," said Linda Moss, president of FirstEnergy's Maryland operations.

The Myersville project is the first of two battery energy storage projects proposed by Potomac Edison in response to the state's Energy Storage Pilot Program, which was established in 2019 to examine new technologies that could have a transformative impact on electric distribution systems. The program required all investor-owned electric utilities to submit at least two energy storage proposals to the Maryland Public Service Commission for consideration. The Myersville project is the first to be completed by a utility under the program.

The second project, a 1.75-megawatt battery energy storage project planned for Allegany County, will provide back-up power to more than 1,000 customers during outages, enhancing service reliability in an area west of the town of Hancock. That project is expected to be in service in early 2024.