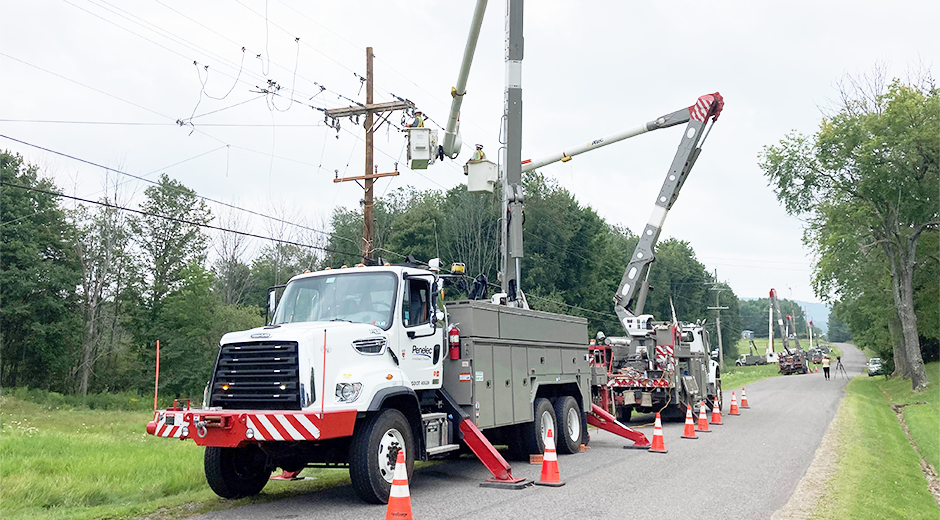 ERIE, Pa., Aug. 26, 2021 -- Penelec, a subsidiary of FirstEnergy Corp. (NYSE: FE), has begun a major project to replace a power line between Dushore and New Albany with a new line that has the capacity to transport significantly more electricity. Stretching five miles, the reconstructed 34.5-kilovolt (kV) line will feature a larger diameter aluminum wire capable of conducting more than twice as much electricity as the line it will replace.

The upgraded line will also provide greater flexibility on the local network for line workers to quickly restore electric service for thousands of customers in rural Sullivan County, Pennsylvania, after storms, vehicle accidents or other causes. This will be enabled by new switches on the lines that will allow crews to temporarily reconfigure the electrical network to isolate damage and limit the number of customers without power as crews repair equipment.

Because the wire weighs more, Penelec crews are attaching it to heavier wooden poles that stand about 50 feet tall, five feet taller than the existing poles erected in 1941. The taller poles will also safely accommodate a lower-voltage electric line and other utilities such as phone and internet cables.

"This project will help us keep power flowing reliably to nearly 4,000 Penelec customers and 3,400 customers of the neighboring Sullivan County Rural Electric Cooperative (REC)," said Scott Wyman, president of FirstEnergy's Pennsylvania operations. "This all-new line will provide added flexibility to operate our local electric grid. If one of the other two 34.5-kV lines that supplies electricity to the area's distribution network is damaged by severe weather, a vehicle accident or other cause, the rebuilt line will have the capacity to provide continued electric service for more customers while crews make repairs."

Crews are reconstructing the line in three phases. The initial phase began this summer with work to rebuild about one mile of line from a substation in Dushore and heading north out of town. The second and third phases are scheduled for 2022 and 2023, with construction progressing at about two miles per year.

Editor's Note: Photos of Penelec crews using bucket trucks attach conductor to the new poles along Churchill Street in Dushore are for download on Flickr.