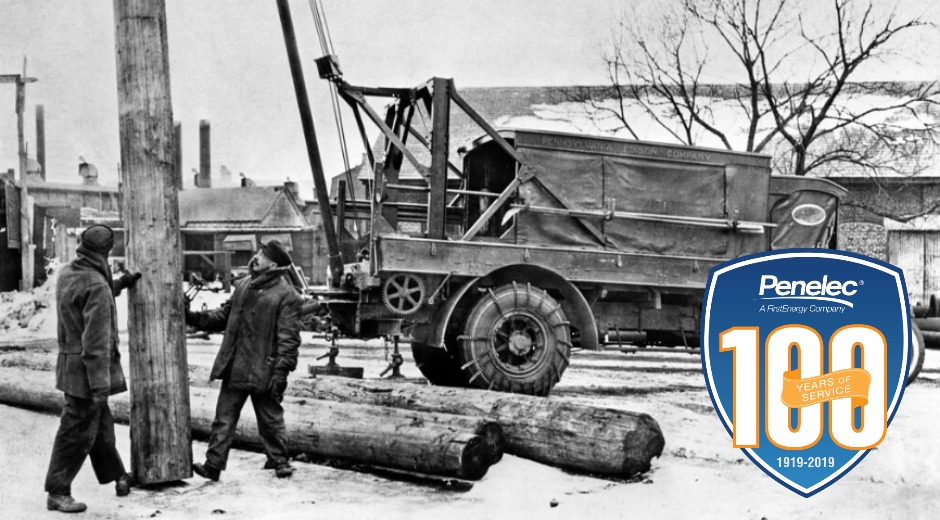 READING, Pa., June 6, 2019 -- Tracing its roots to a handful of companies that illuminated downtown streetlights – from dusk until an hour after the saloons closed in some spots – the Pennsylvania Electric Company (Penelec), a FirstEnergy Corp. (NYSE: FE) utility, marks its 100th anniversary on June 10.

What began long ago as a tiny company in Philipsburg, Pa., with 16 customers along 2 miles of line, Penelec has evolved into a modern electric utility with more than 700 employees serving nearly 600,000 customers throughout a sprawling 17,000-square-mile service territory, the largest footprint of any FirstEnergy utility.

"The world has changed immeasurably over the last hundred years, and Penelec has been there each step of the way, delivering safe, reliable electric service to our customers," said Nick Austin, Penelec's regional president. "Our employees continue to work tirelessly to satisfy our customers' desire for the latest electric conveniences and technologies."

Penelec will celebrate its 100th anniversary with active employees over breakfast in Johnstown, Erie, Altoona and 14 other company locations on June 10. Penelec retirees will be honored at receptions where they can visit with former co-workers, swap stories, view old photos and watch a video. Retiree receptions are scheduled throughout the week of June 10 at company locations in Johnstown, Altoona, Erie, Meadville, Oil City, Mansfield, Towanda, Lewistown and Shippensburg.

Pennsylvania State Rep. Parke Wentling, a Republican representing parts of Crawford, Erie, Lawrence and Mercer counties, will present a resolution in honor of Penelec's milestone anniversary on June 11 in Harrisburg. Scott Wyman, president of FirstEnergy's Pennsylvania operations, will join Austin to accept the resolution on the floor of the state House of Representatives.

On June 10, 1919, the numerous electric companies that powered towns and cities such as Erie, Warren, Huntingdon, Lewistown, Bedford, Punxsutawney, Towanda and Oil City consolidated to form the Penn Public Service Corporation, headquartered in Johnstown, Pa. It was "grow or go" time for the fledgling industry, and Penn Public Service would swallow more than 20 small electric companies via mergers and acquisitions over the next decade.

An innovative Penn Public Service built and energized what was dubbed a "super power line" in 1926 to connect its Piney Hydroelectric Station on the Clarion River in Clarion County to West Penn Power Company facilities in neighboring Armstrong County. This new line was the final link of a transmission connection that joined networks of 17 electric companies stretching from Chicago to Boston. Penn Public Service changed its name to the familiar Pennsylvania Electric Company or Penelec in 1927.

Linemen and their horse-drawn service wagons became commonplace as the 1920s progressed, just as people expected more from electricity than brighter streets and sidewalks. They demanded electric-powered lights in each room of their homes and clamored for electric irons, washing machines, vacuum cleaners and other "necessities" to ease their chores.

Never shy to promote novel ways for customers to use its product, Penelec in 1938 partnered with Westinghouse in the "Tuff Guy School" advertising campaign, highlighting the efforts of apron-clad men as they learned to cook tasty meals with electric kitchen appliances.

A Tradition of Strong Community Support

"Penelec's commitment to the areas we call home doesn't stop with the delivery of reliable electric service," Austin said. "Our employees live in the communities we serve, happily volunteering their time, talents and dollars to make each a better place to live, work and raise families."

Since 2010, Penelec employees, augmented by FirstEnergy Foundation matching gifts, have pledged about $700,000 to area United Way organizations and collected about $153,000 and 5,500 pounds of food – the equivalent of nearly 1.1 million meals – for local food banks through Harvest for Hunger. They've also participated in walk-a-thons, book drives, coat drives, blood drives, and holiday toy and gift collections for numerous other charitable causes.