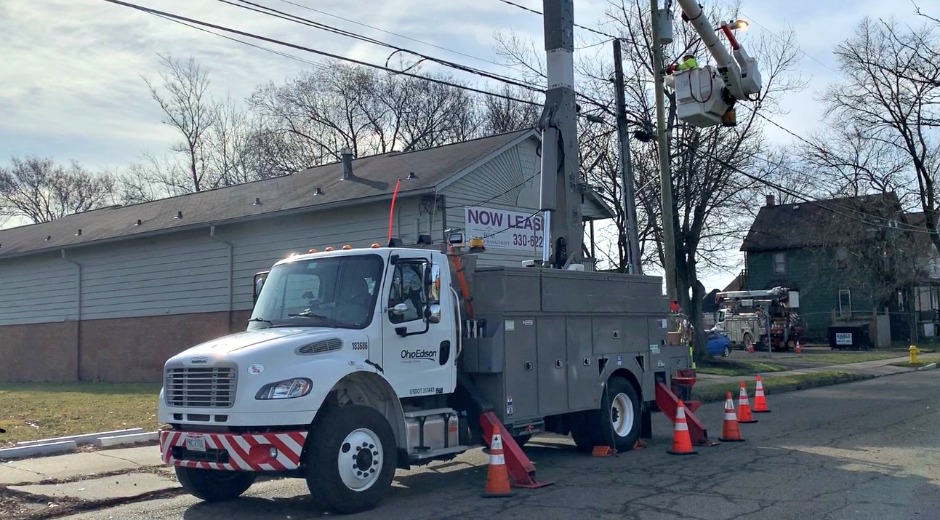 AKRON, Ohio, Feb. 3, 2020 -- In partnership with the City of Akron and The University of Akron, Ohio Edison, a subsidiary of FirstEnergy Corp. (NYSE: FE), has begun installing 252 new LED streetlights in the South Exchange Street Corridor neighborhood, south of the University of Akron. The project will improve visibility for motorists and pedestrians in the area, which is largely home to university students. The project is expected to be complete by the end of May.

"We're pleased to see the first new LED streetlights being installed here today, and we appreciate the city and Ohio Edison including this neighborhood where so many UA students reside, as part of the initiative," said University of Akron President Gary L. Miller. "This project, which will create a more appealing and secure environment for all residents, is the kind of win-win collaboration that the University is eager to engage in and support."

The new LED streetlights are more efficient, have a longer service life and provide brighter, higher-quality light output that meaningfully improves visibility after dark. They also accommodate newer technologies that can be added in the future to increase safety, including motion sensors and cameras.

"Communities across the FirstEnergy service areas in Ohio and elsewhere have noticed substantial improvements in visibility and security where LED streetlighting has been installed," said Ohio Edison President Edward Shuttleworth. "We are pleased to be able to work with the City of Akron and The University of Akron to bring these improvements to the South Exchange Street Corridor."

The City has already made a similar investment in LED streetlights in the Copley Road corridor, as part of the "Great Streets Initiative" program.  In addition to the work near the University of Akron, ten other Akron neighborhood centers also will receive LED streetlights through this initiative in the coming years.

"The South Exchange Street Corridor neighborhood remains the lifeblood of the University of Akron's off-campus community," said Akron Mayor Daniel Horrigan. "This neighborhood serves as a hub for student activities, with shops and restaurants that draw the neighborhood together. Where the lights are brighter, residents feel safer, and we're pleased today to start making this a brighter, more inviting space for our students to live, work, shop and learn."