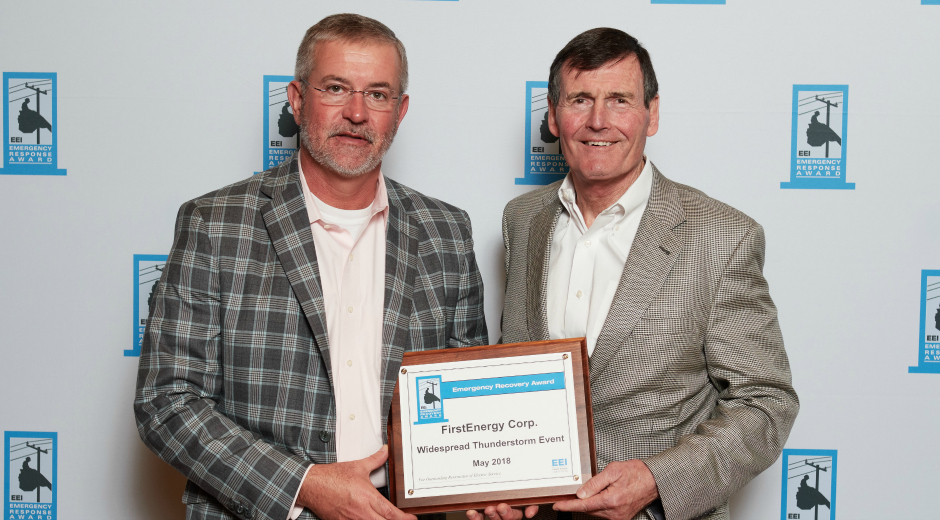 AKRON, Ohio, June 12, 2019 -- FirstEnergy Corp. (NYSE: FE) has earned the Emergency Response Award from the Edison Electric Institute (EEI) for its efforts to restore more than a million customers to service after a several-day wind storm in late February. EEI is a leading electric industry organization.

Winds that reached 70 miles per hour battered the company's six-state service area, from Ohio to New Jersey, and the entire region experienced sustained 40 mile-per-hour winds for a 12 hour period.

These gusts and sustained winds not only did significant damage to the company's transmission and distribution systems, but also delayed restoration efforts because workers were unable to safely work to repair overhead lines until the wind speeds dropped.

In total, with assistance from thousands of outside workers from 18 states, the company replaced more than 127 miles of wire, more than 1,100 poles and nearly 800 transformers, visiting more than 10,000 damaged locations to restore power to all affected customers.

"FirstEnergy is deserving of this award for its efforts to restore service quickly and safely in the Mid-Atlantic after the wind storm," said EEI President Tom Kuhn. "The dedication of FirstEnergy's crews reflect the electric power industry's commitment to its customers, and I thank them for their tireless work."

"This EEI award recognizes the outstanding efforts of our crews and support personnel, who work around the clock in difficult circumstances to restore power when severe weather impacts our service area," said Sam Belcher, senior vice president of FirstEnergy and president of FirstEnergy Utilities. "I'm very proud of our crews, who teamed to complete repairs safely and efficiently despite extra challenges created by the sustained high winds that caused so much damage over a period of days across our service area."

EEI presents awards twice annually to member companies to recognize extraordinary efforts to restore power or for assisting other electric companies after service disruptions caused by weather conditions and other natural events.  Winners are chosen by a panel of judges following an international nomination process.  The awards were presented June 11, 2019, during the summer EEI Board of Directors and CEO meeting.

EEI is the association that represents all U.S. investor-owned electric companies. Our members provide electricity for 220 million Americans, and operate in all 50 states and the District of Columbia. As a whole, the electric power industry supports more than 7 million jobs in communities across the United States. In addition to our U.S. members, EEI has more than 65 international electric companies as International Members, and hundreds of industry suppliers and related organizations as Associate Members.

Editor's Note:  A photo of FirstEnergy Senior Vice President and President of FirstEnergy Utilities Sam Belcher accepting the emergency response award from EEI is available for download on Flickr.