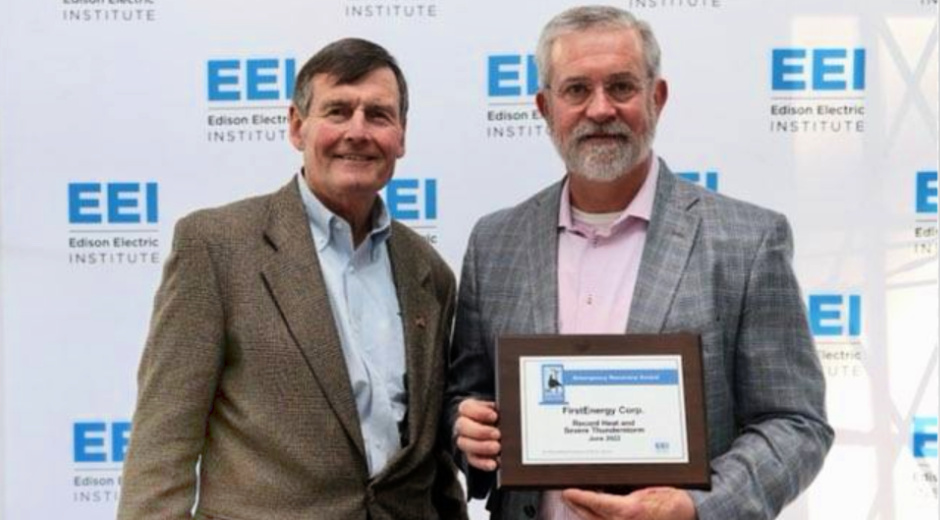 AKRON, Ohio, Jan. 12, 2023 -- FirstEnergy Corp. (NYSE: FE) has received an Emergency Recovery Award from the Edison Electric Institute (EEI) in recognition of its outstanding response in restoring power to more than 287,000 customers in Ohio and West Virginia following severe weather that produced three confirmed tornadoes and extreme temperatures in June 2022. This is the seventeenth consecutive year that FirstEnergy has been recognized by EEI for its storm response efforts.

"I am proud to accept this award on behalf of the hundreds of FirstEnergy employees and others who worked tirelessly in difficult conditions to get the lights back on for our customers during some of the hottest days of the year," said Sam Belcher, senior vice president of FirstEnergy and president of FirstEnergy Utilities. "Our Ohio Edison and Mon Power personnel worked safely around the clock, overcoming challenging weather, impassable roads and other hazardous conditions to be there when our customers needed us the most."

EEI presents awards twice annually to member companies for extraordinary power restoration efforts or assistance to other electric companies after service disruptions caused by weather conditions and other natural events. Winners are chosen by a panel of independent judges following an international nomination process. The awards were presented Wednesday, Jan. 11, during EEI's winter Board of Directors meeting.

"Throughout the past six months, electric companies faced devastating hurricanes, unprecedented heat waves, and many other extreme weather events that impacted the customers and communities we serve," said EEI President Tom Kuhn. "I commend FirstEnergy's commitment to restore service for its customers safely and quickly under challenging conditions. FirstEnergy and its storm response team undoubtedly are deserving of this national recognition, and I am honored to present them with this well-deserved award."

EEI is the association that represents all U.S. investor-owned electric companies. Our members provide electricity for 220 million Americans and operate in all 50 states and the District of Columbia. As a whole, the electric power industry supports more than 7 million jobs in communities across the United States. In addition to our U.S. members, EEI has more than 65 international electric companies, with operations in more than 90 countries, as International Members, and hundreds of industry suppliers and related organizations as Associate Members.

Editor's Note: A photo of FirstEnergy receiving the award from EEI can be viewed/downloaded on the company's Flickr channel.