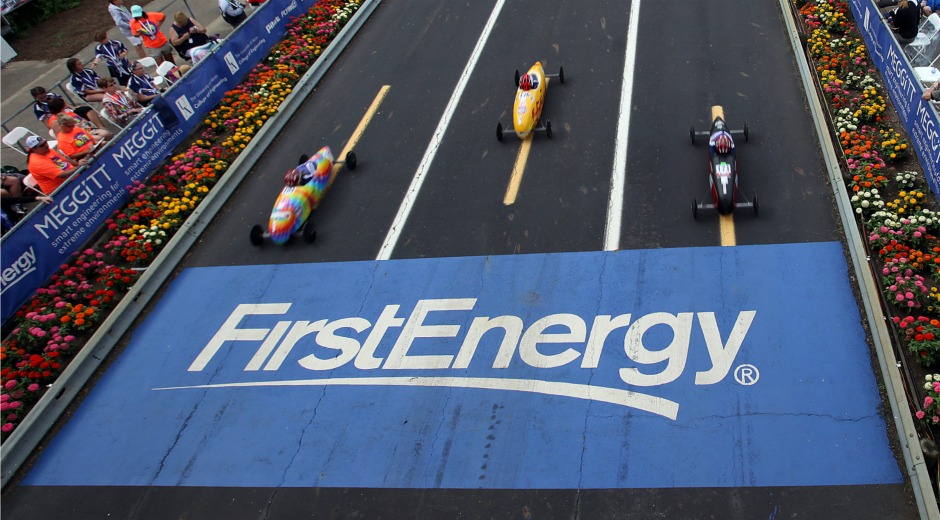 AKRON, Ohio, July 17, 2019 -- The All-American Soap Box Derby announced today that FirstEnergy Corp. is extending its title partnership for five years, continuing the relationship between the two Akron-based institutions that began in 2012.

The extension was announced during "race week" activities surrounding the 82nd FirstEnergy All-American Soap Box Derby, with more than 400 boys and girls in Akron from throughout the United States, Canada and Japan to compete in their gravity-powered race cars for a share of $36,000 in college scholarships.  The world championship races are Saturday, July 20 at Derby Downs.

"FirstEnergy is proud to continue our sponsorship of a signature event that brings people from all over the world to Akron," said Charles E. Jones, FirstEnergy's president and chief executive officer.  "For more than 80 years, this organization has provided young people the opportunity to learn important design, engineering and other STEM lessons, while at the same time developing the value of teamwork and friendly competition.  By sponsoring the event, we want to help make sure this great Akron tradition continues."

"FirstEnergy has been an excellent partner of the Soap Box Derby since 2012, and we are grateful and thrilled that the company is extending our relationship for another five years," said Mark Gerberich, president and chief executive officer of International Soap Box Derby.

"FirstEnergy's title sponsorship enables our organization to expand Soap Box Derby programs to new communities and to more youngsters, to enhance the experience for boys and girls and their families who come to Akron for the FirstEnergy All-American Soap Box Derby and ensures our financial stability," Gerberich said.  "In addition to its financial commitment, FirstEnergy and its staff are strong supporters of our marketing and volunteer efforts."

ABOUT THE SOAP BOX DERBY

The Soap Box Derby is an international nonprofit organization whose mission is to build knowledge and character, and to create meaningful experiences through collaboration and fair and honest competition. The Derby's Core Values and Drivers include: Youth Education and Leadership Development; Family Engagement and Enrichment; Honesty, Integrity and Perseverance; Innovation and Entrepreneurship; Teamwork and Collaboration; Mentoring; Volunteerism, and Commitment to Community. The Derby's two youth initiatives are the FirstEnergy All-American Soap Box Derby racing program and the STEM-based Education Program, which provides educational opportunities for K-12 youth worldwide through Soap Box Derby racing.   For more information, visit soapboxderby.org.