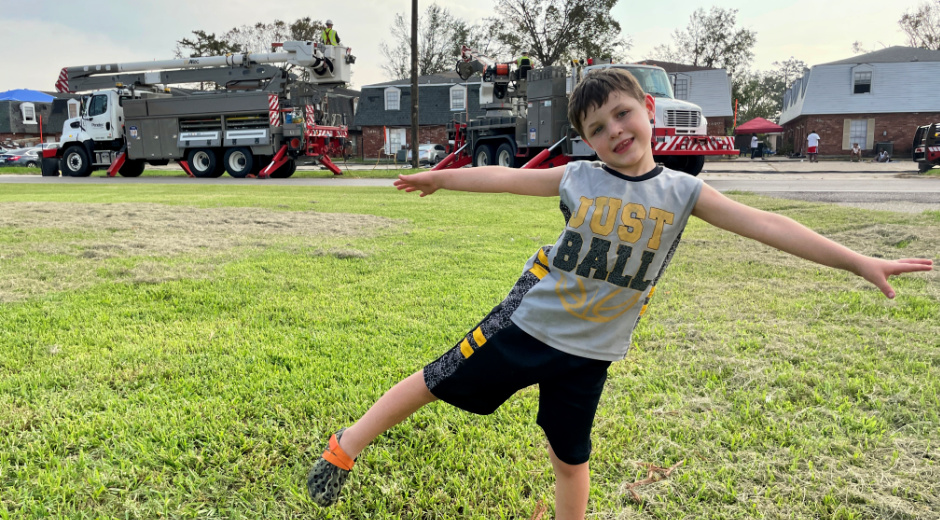 Jennifer Simoneaux and her family had been without power in their New Orleans home since Aug. 29. You’d never know that with their positive and upbeat personalities—especially as temperatures in southeast Louisiana soared to nearly 100 degrees over the past week.

Simoneaux and her 7-year-old son, Jayden, were outside in front of their damaged home on Monday, Sept. 6, greeting FirstEnergy line workers with boxes of pizza and thanking them for making the trip down to help their local communities rebuild after Hurricane Ida.

Hundreds of FirstEnergy utility workers from all 10 of its electric companies have been working within a 15-mile radius of Simoneaux’s home, which is located in Harahan right outside of New Orleans. They are working to rebuild several miles of the local power system that was damaged and, in some cases, completely destroyed by Ida’s wind speeds that clocked well over 100 mph. Their work includes replacing hundreds of downed and broken utility poles and restringing and hanging new power lines and electrical equipment.

“After going through Hurricane Katrina, we have a deep appreciation for electric utility workers because they truly are the first step in helping our communities rebuild,” said Simoneaux. “For them to leave their families and come down here for weeks at a time, it really means a lot to me and my neighbors.”

Despite the significant damage to the exterior of her home, Simoneaux said her family fared pretty well during this storm and she feels like one of the “lucky ones.”

“We have been able to operate a generator for a few hours throughout the day, so that keeps us cool during the hottest times of the day,” she said. “My son, however, prefers to be outside watching all the linemen use their trucks and equipment. He’s in his glory!”

According to Brent Coakley, one of several FirstEnergy operations directors overseeing the company’s contingent of 500 utility workers, southern hospitality has been on display since they arrived in Louisiana.

“People return home for the first time to see that they have lost a lot, but they still take the time to thank our crews who are working in their neighborhood and offer them cold drinks and food," he said.

FirstEnergy is a member of multiple electric utility mutual-assistance groups that work cooperatively to restore service to customers when a natural disaster causes large-scale power outages. Mutual assistance allows utilities to pool their resources to help restore power to customers faster. FirstEnergy and its employees have been honored numerous times by the Edison Electric Institute (EEI) with its "Emergency Assistance Award" for the mutual assistance the company has provided during winter and summer storms.

FirstEnergy line workers, forestry crews, support personnel and internal contractors have been in Louisiana assisting Entergy with restoration efforts for about two weeks, and they expect to provide assistance for several more days.

“The electric utility industry relies heavily on mutual assistance,” said Coakley. “No individual company has the resources to essentially rebuild an entire grid or face the kind of catastrophic damage they are facing in Louisiana.”