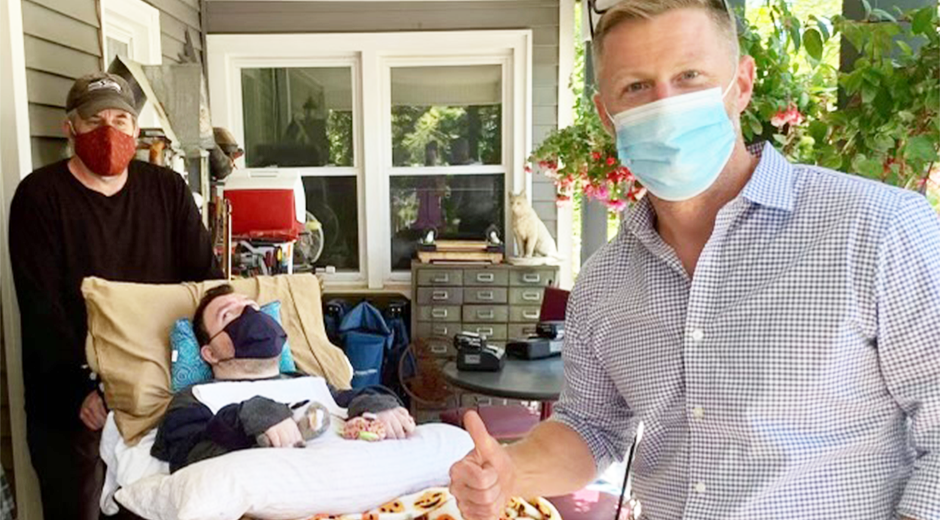 Kecia Deveney’s family was among the millions of New Jersey residents to feel the brunt of Tropical Storm Isaias, including losing power at their Wall Township (Monmouth County) home. As the summer weather warmed in the storm’s wake, Deveney grew concerned about her son, Tucker, who suffered an anoxic brain injury as the result of a complication during surgery when he was 18 months old.

“Tucker can’t control his body temperature very well. We have to be really careful about him overheating,” Deveney said. “It was getting a little warm in here, and we were getting battery-operated fans.”

After speaking with friends and doing some outreach via social media, Deveney was connected with Frank Luna, Regional External Affairs Consultant for JCP&L. Upon hearing about Tucker’s medical needs – the brain injury has left the now 31-year-old with severe vision impairments, the inability to talk or move on command, and requiring suction to help keep his airway clear – Luna coordinated with operations staff, who put a priority on restoring the Deveney’s power.

“We always do our best to get power back on, but we do have a Critical Care list of customers that we try to get back on sooner due to certain medical conditions,” Luna said. The Deveney’s have been added to that list. (JCP&L customers whose household members rely on electrically operated life-support equipment can sign up for the Critical Care list here: Critical Care and Well Water Customer.)

As the storm clean-up ended, Kecia Deveney grew worried about the state of the ramp from their driveway. The ramp was built in 1996 and showed signs of significant wear and tear.

“I always thought, am I going to fall this hole? Is this the day I’m going to break the ramp and fall through it?” Deveney said. She reached out to Luna, seeking recommendations for a contractor to make repairs.

Instead of just providing a recommendation, Luna leaned on relationships he’d built with JCP&L team members and local elected officials to tackle the project. He called on local International Brotherhood of Electrical Workers (IBEW) union leadership and State Senator Vin Gopal, whose legislative district includes neighboring towns in Monmouth County, but not the Deveney’s home in Wall.

“I saw an opportunity to help out a little more than she maybe had asked. Learning about Tucker and all that he’s been through, it was just a really good opportunity for us to help bring the community together,” Luna said. “I know Sen. Gopal – he’s been really inspired by Tucker, and he brought a whole bunch of people together to do something nice.”

With funding provided by Sen. Gopal, local IBEW leadership donated their time and labor to work on the ramp.

After assessing the ramp and its foundation, the team decided to remove the existing ramp and start from new. This gave the IBEW team an opportunity to make improvements to help the family move Tucker in and out of the house, such as widening the ramp to facilitate maneuvering.

Even Tucker enjoyed the process. Though he has vision and speech impairments, Tucker’s dad, Jeff Deveney, said Tucker’s hearing is impeccable. The sounds of saws and nailing brought obvious excitement to his face. A day-and-a-half of work later, the family’s new ramp was complete.

“Asethetically, it’s really beautiful,” Kecia Deveney said, who noted she and Jeff can now walk side-by-side on the ramp. “They reconfigured a couple of spots, and now it’s just like NASCAR. And it’s so sturdy – that’s a big blessing.”

The relationship between Luna and the family continues to remain strong. He even sent Tucker a note and customized stickers with Luna’s personal mantra - “Its’ a good day for a good day.” Deveney put the stickers on Tucker’s wheelchair, noting that it was the way Luna sent them that touched the family the most.

For everyone involved, the project represented the strengths of the community.

“It definitely hits home,” said Robert Shimko, business manager for IBEW Local 400. “It is in the town our business is in, the town where I live.”

“The incredible impact it could have on one family by just doing this made it all worth it,” Sen. Gopal said. “We just came together and got it done.”