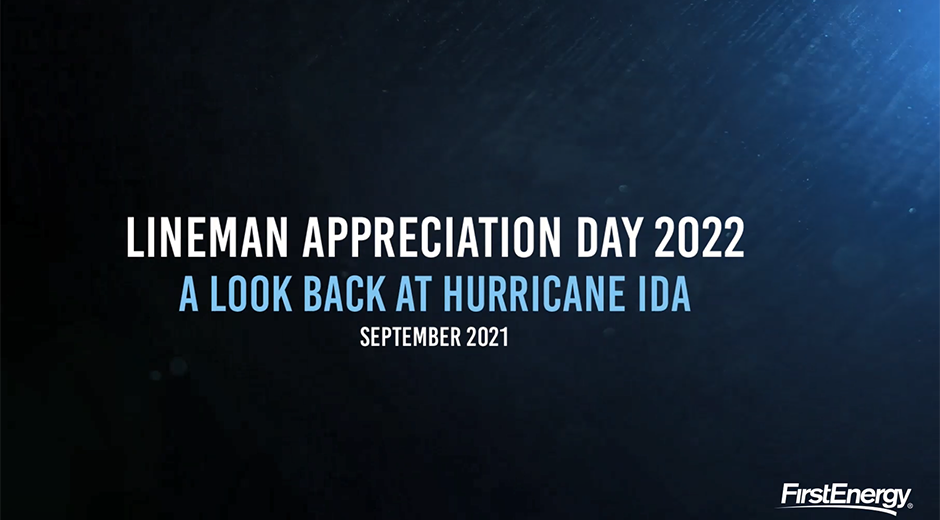 It's Lineman Appreciation Day. Today, and every day, we are proud to recognize the men and women who work tirelessly to ensure we have the power we rely on to stay safe and comfortable every day. And, when Mother Nature strikes, they always answer the call and restore power as quickly and safely as possible.

To celebrate this special day, FirstEnergy line workers reflect on the extraordinary effort required to restore power to Louisiana residents in the aftermath of Hurricane Ida in September 2021.

Scattered wreckage and debris littered the roadways of Louisiana as FirstEnergy line leader Dennis Darling and his crew made their way through the state on Sept. 1, 2021, nearly three days after departing from an Ohio Edison line shop.

While Louisiana is far from FirstEnergy’s five state service territory, the company’s line workers were assisting in the state as a member of multiple electric utility mutual-assistance groups that work cooperatively to restore service to customers when a natural disaster causes large-scale power outages. Mutual assistance allows utilities to pool their resources to help restore power to customers faster.

As Darling approached his first worksite – an area just outside New Orleans – the severity of the damage grew progressively until he finally arrived at his destination. What was once a local center of economic activity was now a chaotic landscape devastated by Hurricane Ida, which brought extreme winds, storm surge and flash flooding along the northeast Gulf Coast. Structural damage, broken poles and downed power lines were visible everywhere. Energized homes and businesses were not.

“I was stunned by the sheer scope of the damage. I had never seen anything like it in my 20 years here, and I’ve worked through many storms,” said Darling. “I knew we had a tough job ahead of us.”

Thankfully, Darling was accompanied by approximately 500 other FirstEnergy line workers, support personnel, internal contractors and forestry crews who also traveled more than 1,000 miles from home to help Entergy with power restoration efforts following the category 4 hurricane. Together, these workers, representing all 10 of our electric companies, safely replaced miles of wire and hundreds of poles in just over two weeks.

Their collective efforts helped rebuild entire neighborhoods, and their work did not go unnoticed.

“Some of these people had been without power for over a week and were going out of their way to show their thanks by preparing southern meals for our crews and making sure we had everything we needed,” Darling said. “It was a truly humbling experience.”

While many FirstEnergy line workers were playing a vital role in restoring power in Louisiana, others were busy answering the call of duty at home. A few days after the storm hit Louisiana, remnants from Hurricane Ida made their way to our Pennsylvania and New Jersey service areas, bringing powerful wind and heavy rain.

By leaning on contractors and other utility personnel from lesser-impacted areas, we were able to safely restore power to about 175,000 FirstEnergy customers impacted by the storm in an award-winning effort.

“We worked with crews from all over FirstEnergy’s service area to get customers back up and running as quickly and safely as we could,” said Zach Boldizar, an Ohio Edison line worker that traveled to New Jersey to aid with restoration efforts following Hurricane Ida. “Line workers have a tight-knit brotherhood that extends past state lines. We can always count on one another to help in a time of need.”

This “tight-knit brotherhood” is made up of nearly 2,500 line workers across FirstEnergy’s 10 electric utility companies in Ohio, Pennsylvania, New Jersey, Maryland and West Virginia. They work all hours of the day and night — often in hazardous conditions — to serve customers.

We hope you’ll join us in recognizing these talented and committed essential workers who put their lives on the line and sacrifice valuable time away from their families to provide the safe and reliable power we depend on. Thank you!