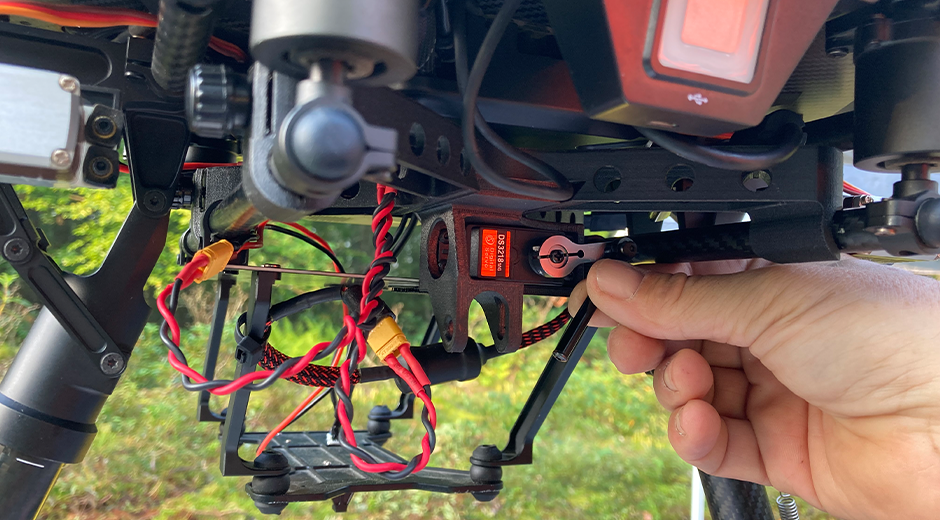 “Roll right!” crackled the commands over the radio from the spotter standing a third of a mile away on the opposite side of a deep ravine. “Slowly back up until I say stop. Drop! Drop! Drop!”

A drone pilot deftly manipulates his handheld control pad to release the payload. A construction crew positioned on the far side of a gorge along a West Penn Power transmission line right-of-way catches the slender yet strong paracord from the drone.

The drone played a key role in helping FirstEnergy crews attach two new shield wires high atop a pair of transmission structures separated by 1,600 feet of rugged terrain in Elk County, Pennsylvania. The shield wires, which protect power lines from lightning strikes, had to be replaced after they were inadvertently sliced by a small plane spraying for gypsy moths.

The shield wire installation was a three-step process that started with the drone pulling a lightweight paracord – or “pilot line” – from one transmission structure to the other. The line acted as a guide that pulled a heavy rope, attached to the pilot line by workers on the ground, which in turn helped crews pull the metal, coiled shield wire from one structure to the other to complete the installation. Workers perched 90 feet in the air attached the lines to the structures.

The shield wire replacement was one of the first times a drone has pulled a pilot line on a transmission project, making FirstEnergy a pioneer in utilizing the technology.

The line pull using a drone proved a concept: unmanned aerial flight technology has evolved to where drones can, in the right scenario, pull pilot lines needed to string wire along transmission lines, a task traditionally completed using helicopters.

In advance of the shield wire replacement, Randy Inman, supervisor of meteorology and Unmanned Aerial Systems (UAS) Services for FirstEnergy, and his team prepared an estimate to complete the job and determined it was more cost effective to use the drone rather than a helicopter for the work. The outcome might be different on another job, such as pulling a pilot line to hang wire along numerous transmission structures.

“It really depends on the circumstances,” Inman said. “We need to evaluate using a drone or helicopter on a case-by-case basis.”

With helicopter operators that offer line-pulling services in short supply, Inman said it is beneficial to have drone technology available as a viable alternative. Battery-powered drones also offer a more environmentally friendly alternative to fuel-powered helicopters, he added.

Pulling the wires on the ground without the help of drones or helicopters can sometimes be an option, but not in rugged terrain as seen in Elk County. If the steep hillsides and trees did not impede progress, Eastern Timber rattlesnakes growing to more than 6 feet in length might prove deterrent enough.

Drones for the Future

Inman said his UAS group is always looking for ways to leverage drone technology to make FirstEnergy’s utility work safer and more efficient. The idea to use a drone to pull a pilot line on a transmission project came from a presentation at an Electric Power Research Institute (EPRI) conference focused on emerging UAS technology.

“We knew this is something we could do given our previous success using drones in other applications across the company,” Inman said.

For years, FirstEnergy’s in-house UAS team has successfully piloted drones to conduct equipment inspections in electrical substations and along power lines, inspect osprey nests situated on poles and other utility infrastructure, and examine equipment after major storms to help identify needed repair work. In these applications, drones have provided a quicker and safer way for utility personnel to complete work, especially in remote or difficult-to-access locations.

Just over the horizon may be the marriage of drone-collected images and data with artificial intelligence to determine repairs that need to be made throughout the electric system. Presently, if a drone flies along 10 miles of transmission line and takes photos as part of an inspection, someone needs to sit down and review those images. This can be a time-consuming process.

“If we could combine the use of drones with artificial intelligence to identify failed insulators or damaged poles, that could provide a much quicker turnaround,” Inman said.